For Stephanie Payne, one of the Center’s child welfare services trainers, obtaining a Doctor of Social Work (DSW) from Tulane University, was not just about achieving a personal goal.  It was about breaking generational cycles, manifesting a dream, and expanding a narrative.

Stephanie’s story started with her mother, who was valedictorian of her high school class.  The expectation in the family was not one of higher education or advanced degrees; instead, it was getting a “good job,” marrying, and starting a family.  That is exactly what Stephanie’s mother did.  In fact, she continues to work at the same job today.  She married and started her family, doing all the things she was supposed to do, never realizing her own dreams of higher education and a different career.

After her parents divorced, Stephanie saw her mom sacrificing and working tirelessly to provide for their family.  It has been said that children live what they see, not what you say, but Stephanie expanded that narrative.  She obtained a bachelor’s degree and a master’s degree, despite every obstacle she faced.  She mirrored the work ethic and tenacity of her mother and pushed through her own divorce, single parenting, and other life challenges to stand in this space today. For Stephanie, this means being the manifestation of her mother’s dream, with her mother being her biggest supporter.  It is also means being an example to her son, whom she describes as her biggest cheerleader.

Stephanie came to the Center for Child and Family Studies as a quality assurance reviewer, but her current supervisor, Rita Martin, noticed her “presence” and brought her to the training team.  Rita shared that Stephanie is “not traditional in her approach; she’s an out-of-the box thinker, always looking to make something better.”  Shena Gamble describes Stephanie as inspirational and said that Stephanie’s “hard work and effort put into every endeavor is beyond excellent.”

Stephanie describes herself as “a social worker at heart,” stating that her DSW will allow her to expand her social work practice. Stephanie is also a history maker.  In obtaining her DSW, she was part of the first online cohort for Tulane University and maintained a 4.0 GPA until she took a deep breath in her last course, and allowed herself to accept a B.  She was included in the SC Black Pages “Top 20 under 40” for the Class of 2020.  She was accepted into 1 of 20 spaces available for a fellowship with the University of Michigan and Wayne State University for doctoral students of color. Her capstone project was a reflective piece co-authored with a professor from Tulane, “Are You Going to Get in Line: Black Administrators Navigating and Negotiating White Cultural Norms.”

When asked what she would want someone to know about her, Stephanie responded, “I’m a strategic dream catcher, I’m resilient, I show up despite the challenges, and I always lead with my best self, even in the most difficult situation.”  Stephanie also wants to encourage other mothers to have an identity apart from parenting and not let the necessary sacrifices become a deterrent to achieving.

Rita forecasted that greater doors would open for Stephanie or that Stephanie will kick down the doors that won’t open.  She added that Stephanie will make leaps beyond child welfare that will possibly contribute to strengthening the center’s collaboration with the College of Social Work.  Stephanie has not identified which of the multiple opportunities before her will be her next step.  In the meantime, she will continue to bloom where she has been planted. 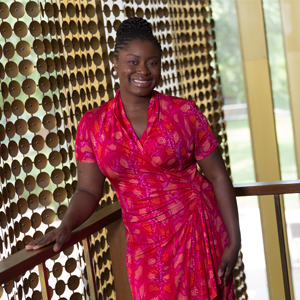