They say the heart of any organization is its people. If you ask Center staff about their organization’s soul, for many the answer is clear—James Randolph. This month, current and former Center staff say a bittersweet goodbye to “Mr. Randolph,” as he’s respectfully and affectionately known. Though he may be taking a bow on his professional career, his life’s work continues, center stage, both through his own efforts and through the work of the thousands who have benefitted from his expertise, wisdom, and mentorship.

For Mr. Randolph, it all started with his parents. His father, a maintenance worker, and his mother, a house cleaner, instilled in him the value of a hard day’s work. “One thing they always stressed, you give your job the best you have,” Mr. Randolph says. “When I was in college, and when I was working in warehouses, I kept that mindset. Always give 110%.”

Mr. Randolph’s work ethic saw him through 21 years at SC Department of Social Services—first as a frontline worker, then as a specialist, supervisor, and finally, a trainer. In 2010, he came to the Center, where he would lead the Economic Services Training Team and play an essential role in solidifying the Center’s work with the Department of Health and Human Services. Center leaders had the foresight to understand that the power of leaders like Mr. Randolph is both direct and exponential. For more than a decade, Mr. Randolph has ensured that thousands of trainees have received the best possible instruction, but his most lasting impact may be his family tree of training staff that has grown roots across the nation.

As a trainer, Mr. Randolph draws from the faith, values, and experience in his church. His introduction to training came after years of teaching Sunday school and Bible study. Anybody who hears Mr. Randolph speak will notice that like all the best preachers, he captivates a room without stealing the spotlight from the content of his message.

“Mr. Randolph stands out for his ability to connect with an audience,” says Karama Herrington, Deputy Director of Court Reporting and Interpreting at the SC Court Administration. “He meets learners where they are. He knows how they feel.” Herrington, who worked with Mr. Randolph closely as the Director of Economic Services at SCDSS, credits Mr. Randolph’s pastoring for his unique ability to empathize and reach out to learners.

Donna Davis, a former trainer under Mr. Randolph, echoes Herrington’s praise. “Mr. Randolph has the charisma to captivate any audience. I’ve never been bored listening to him. He’s got swag!” Davis, who is now the Interim Director of the Office of Health and Nutrition at the SC Department of Education, credits Mr. Randolph for helping her find her passion. Davis is just one example of how Mr. Randolph’s impact on South Carolina will continue for decades.

“Coming to the Center was one of the best professional decisions of my life,” Davis says. “Mr. Randolph is a visionary. He’s always looking toward the future. He knows the moment isn’t really the moment. It’s part of something much larger, and that something has to matter more than the moment.”

Mr. Randolph’s reach even extends into the private sector. Katrina Stephens, a former Economic Services trainer at the Center, is now a Global Business Services Training and Development Section Manager at UPS. Heading a team of two supervisors and 19 trainers in the busy holiday shipping season, Stephens cites Mr. Randolph as helping her hone the skills she needed to succeed in management. “He’s one of the best leaders I’ve ever had,” Stephens says. “He set a great example for how to empower staff to do their jobs well.”

In retirement, Mr. Randolph plans to continue his pastoring work and expand time he spends writing and being with family. Though his extended family at the Center will no longer be seeing him every day, Mr. Randolph’s lessons for his colleagues are far from over.

“Enjoy what you do,” Mr. Randolph says. “Enjoy the people around you. Work shouldn’t be a chore. When it becomes that, it takes away your abilities to produce what you need to. So collaborate. Enjoy the moment. Enjoy the people.” 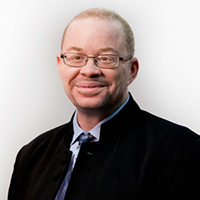